A Car Powered By Whiskey? It’s Not As Crazy As It Sounds! 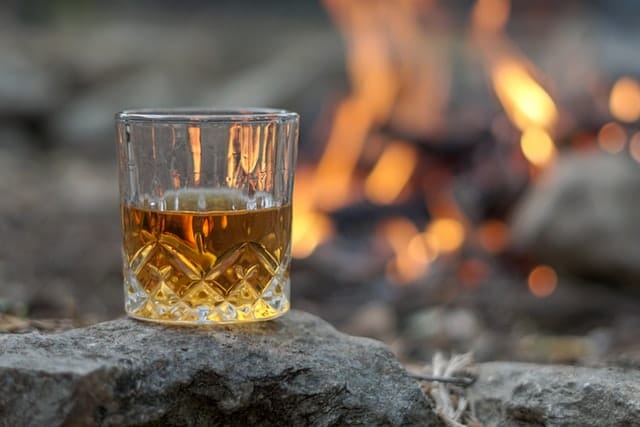 Green cars are really all the rage these days. And the possibilities just keep getting stranger… like a car powered by whiskey! It might sound far-fetched but a Scottish (obviously?) scientist is testing the limits with whiskey waste as fuel.

Just because you shouldn’t drink and drive doesn’t mean your car can’t take one for the team and have a drink for the road.

How would a car powered by whiskey work?

In theory, this all sounds great. The more whiskey you drink (a long time before driving, of course), the more waste is created and the further you can drive your car. Right?

Well, sort of. Here’s how it actually works. Sit down, because things are about to get science-y!

How do you turn waste from whiskey into fuel?

Whiskey is made from grains and yeast mixed together with water. Over time, this mixture vapourises and eventually that famously good Scottish single malt is born (see a fuller explanation of the process here). Obviously, there’s very little waste of the actual vapourised liquid. Unless you’re drinking it mixed with Coke, because then it’s definitely being wasted.

The remainder of the mix isn’t used though, and because whiskey is only around 10% of the mixture most distilleries have to pay large amounts to remove the waste each year. Here’s where the fuel magic comes in.

Celtic Renewables, a company based in Edinburgh, has managed to develop a process which creates fuel from the leftover grains and liquid in the whiskey making process. This waste produces a biofuel called biobutanol.

An alternative to regular fuel, this can be mixed in with fuel and pumped directly into cars without the need for adjustments to their engines. Over time, not only could this save you money, it could help save the planet too.. Substituting petrol with biobutanol reduces the CO2 produced.

If saving money is your primary motivator though (it’s a good one) then check out our tips on saving for a new car.

What’s next for the whiskey waste fuel?

Celtic Renewables has definitely been making waves. Since testing the fuel in 2017 they’ve raised over $50 million in funding. This funding will be put to good use in building the first biorefinery in Scottish history. The new plant is expected to be up and running this year, and will process around 50,000 tonnes of waste each year from the whiskey industry.

If all goes well, they’ll be able to produce an incredible amount of biofuel; around 50 million litres.

Let’s keep our fingers crossed that sooner rather than later, Australians will be driving around in whiskey-powered cars. And with the money and CO2 savings that brings car owners, perhaps we’ll see an easing of some of the road rage we see on Aussie roads!

Keen to up your green motoring credentials well before these booze-fuelled cars hit the market? Consider our article on the 5 Wallet-Friendly Ways of Eco-Friendly Cars.

Or you might go as far as looking into the best electric car  for your lifestyle. New car time, perhaps…

While you’re deciding whether your future whiskey-powered car will be red or black (hot tip: the safest car colours are black and green), have you insured your current one? Having an accident without sufficient insurance could be a real financial burden.

A car powered by whiskey, or…? Over to you!

What other weird and wacky alternative fuels have you heard about? Let us know on our Facebook page!

Let’s Get Social
Facebook
Youtube
Instagram
We offer general advice only. Consider our combined PDS / FSG before deciding about this insurance.
For the avoidance of doubt, the insurance products offered via this site concern only Australian-based risks and are not available to individuals located in the EU.
We use cookies to optimise the design of our websites. By continuing your visit on this website, you consent to the use of cookies. Find out more about cookies and how we use them here.
Copyright 2021. Pacific International Pty Ltd. All Rights Reserved.