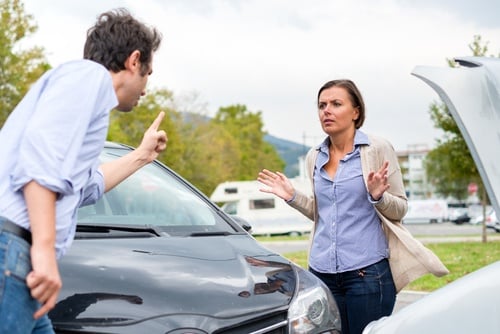 Dealing With Someone Else’s Road Rage Road rage is more than just a touch of irritability. Coping with road rage isn’t so easy, and not just when it comes to your own frustrations. Dealing with someone else’s road rage is often a scary experience.

And, according to research, Aussies aren’t the most easy-going motorists out there. More than 70% of drivers say they’ve experienced road rage in the last year. It’s an ongoing problem, and one you’re likely to tackle at some point on the roads.

Here’s how you can deal with someone else’s road rage.

What is road rage?

Does muttering under your breath count as road rage? Wikipedia defines road rage as ‘’aggressive or angry behaviour exhibited by motorists. These behaviours include rude and verbal insults, physical threats or dangerous driving methods targeted toward another driver or non-drivers.”

If we want a dictionary definition though, Merriam Webster says road rage is “a motorist’s uncontrolled anger that is usually provoked by another motorist’s irritating act and is expressed in aggressive or violent behaviour.”

So, road rage could be anything from yelling or making obscene gestures to becoming violent and aggressive. If you’re affected it hopefully won’t be as bad as this road rage incident in Wellington and this one in Sydney, which illustrate how serious road rage can be.

When it comes to your rage… If you’re just tutting or shaking your head from time to time, that’s totally normal and not a worry. But if it’s escalating, you might be struggling with road rage. It could even be affecting your ability to drive safely – now that’s a concern.

When it comes to another’s rage… Most drivers have to deal with someone else’s road rage from time to time. When you’re confronted by it, it can be really nerve wracking. Regardless of whether you drove poorly or had an error of judgement, here’s what to do.

What driving habits cause it?

Unsurprisingly, there’s been loads of research carried out into the most annoying driving habits. From an Australian study conducted by Monash University to New Zealand Automobile Association market research through to multiple other countries worldwide including the UK and US. It seems like poor driving and road rage are universal problems!

Some of the most commonly listed causes of someone else’s road rage across all of these countries include:

Tips for coping with someone else’s road rage

Dealing with someone else’s road rage can be harder than dealing with your own road rage. Because less of the power is in your hands, you might not be sure what tactics to try. At all times, the aim is to de-escalate the situation and avoid any aggressive or violent encounters.

Here are some tips for dealing with road rage, whether that’s another driver on the roads, or someone you’re sharing a car with.

If the road rage comes from another driver

If another driver on the road is displaying behaviours typical of road rage, you can try:

If the driver leaves their car, the situation has already escalated. You should still try to be non-confrontational and non-reactive. If you do need to engage with them, try to do it somewhere safe like a police station or somewhere with a lot of people around, like a petrol station, or even a supermarket. Make sure to get their vehicle number and keep your dash cam going if you have one, in case you need to file a report with the police or claim damage from your insurance.

Sometimes, just being a passenger with a driver who has road rage can be unsettling. Or you might even be behind the wheel, with someone else’s road rage coming from the passengers’ seat.

If you’re driving, try to keep calm and politely ask your passenger to calm down. Your energy and tone could help placate them and make them realise they’re being out of line. If your passenger yells at someone for cutting in, for example, you can calmly and cheerfully say ‘’that’s ok, I gave him a gap. Don’t worry about it!”’

If the driver of a vehicle you’re travelling in is starting to experience road rage, it’s important to handle the situation tactfully. The last thing you want is to be the cause of added frustrations. That said, you also need to calm the driver down ASAP so that everyone remains safe. Try to find the humour in it or agree calmly then change the conversation. You could even offer to drive if you’re in a position to do so.

If none of that works, it’s best to let the person know that you’re uncomfortable with their dangerous and/or aggressive driving habits. If you’re in imminent danger, do this immediately. However, the more impactful approach might be to allow them some time to cool off and then mention why the behaviour is problematic and concerning.

Hopefully you don’t get caught up in a road rage incident which causes damage to your car. Has road rage resulted in an accident? If so, read our tips on what to do if you have a car accident.

PrevPreviousKennel Cough: Everything You Need To Know
NextDress Up Your Pet Day: What’s New on the CatwalkNext