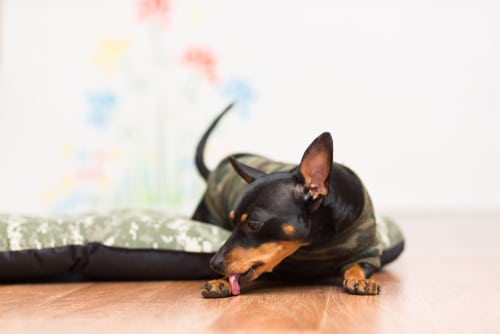 However, it manifests differently in dogs than in humans, as you’d expect. And without a dog psychic (though you can learn how to speak dog, even if you won’t be able to read their thoughts) it’s pretty hard to tell when dogs are thinking obsessive thoughts.

However, if a dog is exhibiting signs that seem to be obsessive compulsive in nature, it’s still concerning.

So how can you identify the symptoms of obsessive compulsive disorder in dogs, and what can you do about them?

The “other” OCD in dogs

Before we get into the details around obsessive compulsive disorder in dogs, keep in mind there’s another OCD.

Osteochondritis Dissecans is a disorder which causes problems with the cartilage in dogs’ joints. This often leads to arthritis along with other issues. It can cause dogs to limp or struggle to walk or move around. But in this article, we’re talking about the better-known OCD: obsessive compulsive disorder.

Now that’s been cleared up, let’s take a closer look at OCD in dogs.

What does obsessive compulsive disorder in dogs look like?

Sometimes, especially in high-energy dogs or puppies, it can be difficult to tell whether behaviour is abnormal or not. Keep in mind normal behaviour isn’t normally repetitive or ‘ritualised’ behaviour.

Repeated licking not only drives owners up the wall, but can give your dogs broken skin and sore, inflamed wounds. This is called acral lick dermatitis. It’s often caused by allergies, arthritis, or stress. Sort of like the dog version of nail-biting, we suppose.

Not all tail chasing is bad, of course. But if (instead of a few seconds of fun) it seems like urgent spinning around, it could be a symptom of seizures. Another possibility is an infection or some sort of physical condition causing pain around the tail area.

This is when a dog holds a part of their flank in their mouth. Some breeds are more disposed to it than others. So it could be a simple genetic predisposition or it could be caused by stress. Unfortunately, it can still result in uncomfortable and unsightly lesions.

There are plenty of other compulsive behaviours, such as becoming fixated with an object, like shadows, lights, or more. Sometimes, we even encourage it inadvertently. For instance, by playing fetch a lot with a dog who becomes obsessive about the ball.

If you suspect a dog is displaying signs of OCD, you’re probably wondering what causes it.

It’s not always obvious what the root cause is. Largely, this is because something that starts out as a physical problem can escalate to a behavioural problem over time. And vice versa.

Take licking, for example. If a dog has a wound, he might lick it. This makes the wound more painful over time, and causes him stress and anxiety.

But the inverse is also true. A stressed-out dog might compulsively lick themselves. They then create a sore, which causes more licking. So it’s a bit of a “chicken and egg” situation.

Regardless, you still have a dog with a licking problem that’s coupled with stress and pain.

Here are some possible reasons for obsessive compulsive disorder and behaviours in dogs:

As you can see, the causes are many and varied.

Separation anxiety in pets is a common trigger for problematic behaviour in dogs. And it’s often a contributing factor when it comes to high stress levels.

If your dog is stressed because of separation anxiety, you’ll be relieved to know that it’s quite manageable. Your first port of call is to make sure your dog gets enough stimulation and exercise.

Here are some ‘tips and tricks’ article suggestions to get you started:

After all, a tired and content dog is usually a well-adjusted one. But if your dog requires more, it’s a good idea to explore other avenues for minimising separation anxiety. Some options include:

The right solution will depend upon your circumstances.

Can you cure OCD in dogs?

As you’ve seen, OCD could be rooted in a physical problem, or a behavioural one. Or even a genetic one!

So it’s a good idea to work with vets and/or behaviourists depending on your dog’s exact behaviours. In many cases, you’ll need to enlist both to tackle the problem effectively.

A vet visit is your first line of defence. It can help you diagnose any physical or genetic conditions that might be causing pain or distress. You can then work on treating the symptoms and causes of any physical conditions and managing pain where needed.

A good vet, dog behaviourist or trainer can also aid greatly in recovery. They can help you identify potential triggers and causes for your dog’s behaviour. More than that, they can also equip you with the tools you need to help your dog combat obsessive compulsive behaviours.

When you take out dog insurance online, you might be eligible for one month free. Which means you can save on premiums and on vet bills for any of those licking, chewing, or tail-chasing habits your dog might display.