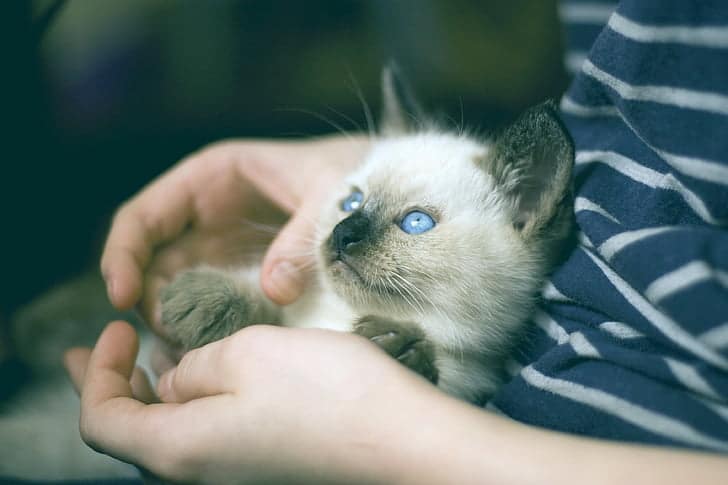 Ever wondered why the Siamese cat has such a special place in our hearts? It’s probably because they’re one of our oldest friends, like a pal you’ve had since pre-school who knows you better than anyone.

That’s right, the Siamese is one of the oldest known domestic cat breeds. Not only has it been with us far longer than most other cat breeds, but it’s also been a friend to kings, monks and many more proud pet parents.

If you’re a Siamese mum or dad, buckle up, this piece is for you. And if you’ve ever considered owning a Siamese, or simply want to know some odd and incredible facts about them, read on for more…

The ultimate career path for a Siamese cat would be as a talk show host or possibly something in marketing and advertising. Any career that gives a Siamese cat a chance to talk a lot, whether it’s talking to people or pets.

Because this is a cat who lovvvvves to chat, all day, every day.

A Siamese will gladly recollect their daily adventures to you, including every detail. They’re so good at speaking and so full of tone and drama you’d have to assume they have good memories. Which may be true given they’re highly intelligent.

Either that or they’re good at making stuff up on the spot.

And they all have unique voices (not that you ever thought otherwise). Some Siamese sound sweet and raspy while others are elegant and ladylike. But woe betide those who own a pair of Siamese (earplugs may be required).

But seriously, you can expect the talking to increase not just twofold, but exponentially. Expect demands, such as “Get out the shower now! We miss you!”

Watch this video to see what we mean:

Siamese cats don’t like being left alone. At all. So, you should plan to hang out together all the time, or at least a lot. Or plan B – they love other pets too – so at the very least you could get them a pet friend. Otherwise, separation anxiety in pets could be a very real outcome you end up facing.

But beware, if you don’t spend enough time playing with your Siamese they can get angry and even violent. Find out what new kitten parents need to plan to keep their cat engaged and entertained. Plus, which cat collars are the safest, regardless of whether your Siamese is an indoor cat or an outdoor one.

Siamese are highly attentive and fiercely loyal and tend to bond with one special human for life. If they see you in danger, they’re even likely to intervene and defend you physically! They’re the perfect bestie, devoted, doting and always there to give a helping paw.

And did you know there are plenty of health benefits from sleeping with your cat in your bed? Two for one: a Siamese bestie and a hot water bottle. ????

An ancient Thai manuscript called the ‘Tamra Maew’ is one of the oldest books about purebred cats. It’s thought to have served as a breed standard like the ones modern cat fancy associations use to decide what a breed’s characteristics should be.

No one knows for sure when this manuscript was created, but some think it could be from as early as the 14th century. And best of all, it features the Siamese cat, which means this breed may have originated this long ago!

Siamese cats originate in Thailand, which was originally called Siam. Hence, they get their wonderful names from where they come from. The King of Siam loved and bred these cats as temple cats to live among the Siam monks. The King also gave them to other political and royal figures as gifts.

Like many purebred pets, Siamese have some health issues they’re more prone to. But never fear, being prone to something doesn’t mean it’s a guarantee. Rather, plan your kitty’s diet and lifestyle habits around a plan that keeps them at their optimum health.

In fact, knowing what your cat is more likely to be affected by could help your vet prescribe a health plan to target these issues before they rear their ugly head.

Here’s what Siamese cat owners should consider being most mindful about protecting their puss against:

Siamese cats are choosy about what they eat. Perhaps this is because they aren’t built to carry added kilos if they become obese. Read up on how obesity can lead to diabetes in dogs and cats.

Pet insurance for your meow

The American singer Paula Cole once said, “Just watching my cats can make me happy.” We couldn’t agree more, which is why we’ve tail-ored three affordable cat insurance plans so you can make your cat happy too.

PrevPreviousWhat Cat Breed Are You? Discover Your Inner Cat
NextDoing Your Financial Planning for The New Financial YearNext