Doing Makeup While Driving: Why It’s a No-No 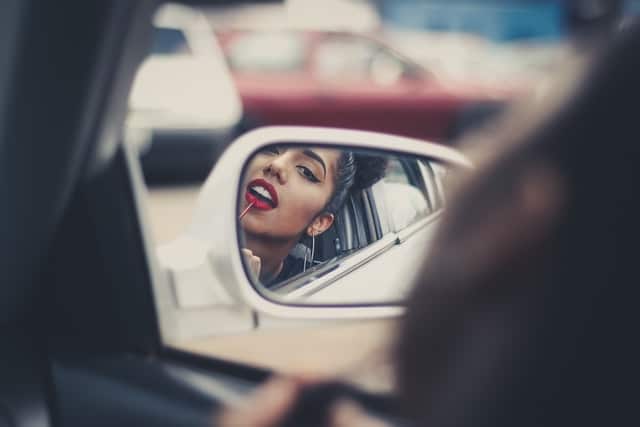 We’ve all seen someone doing makeup while driving or pulled up at traffic lights.. In the crazy rush of the morning or after a busy day at work, it can be hard to find the time to get yourself ready and looking your best.

Adding a little touch of mascara on your way to the office or swiping on some lipstick as you head out to dinner seems harmless. Especially if you’re sitting still in traffic or at the lights. Right?

Nope. Please put on that mascara before you get behind the wheel. Here’s why.

How many people drive while doing makeup?

Previous studies have shown that as many as 46% of women apply makeup while driving – despite nearly half of these people admitting that they know it’s dangerous.

So what’s the big deal? Surely adding a coat of lip gloss or finishing up your foundation isn’t really that dangerous?

Why is it dangerous to do your makeup while driving?

There’s no questioning that getting on the roads can be dangerous. But we rely on fellow road users to be alert and sensible to help limit our risk, just as they do us. Don’t forget that at any point while you’re driving, you may need to brake or swerve to avoid a collision.

It’s estimated that alert drivers react in 1.5 seconds. Distracted drivers (yes, you with the mascara wand) take about three seconds. Which means your reaction times to stop, slow, and swerve could be half as fast as usual. That could be the difference between life and death, especially if you’re travelling at speed.

Keep in mind that most people use the rear-view mirror to put on makeup. This decreases your visibility of the road too, and means you’re less aware of potential hazards behind you. If you use the sun visor mirror instead, your vision is still impeded.

Stopped at a red light or in traffic? You might not need to brake suddenly, but it’s still dangerous. You could roll forward or backwards into somebody.

Or you could be so absorbed in doing your makeup while driving that you don’t notice the lights turning green or an emergency vehicle trying to cut through traffic. Now you’re endangering other people. And it’s embarrassing to be the driver everyone has to hoot at when it’s time to pull away.

Plus, think about the victim factor. Not noticing what’s happening around you makes you an easy target for car theft or hijacking. Or while you’re fixing your face, a thief could be reaching through your window for your handbag or phone. Not ideal!

Is doing makeup while driving illegal?

There’s no law specifically prohibiting you from putting on makeup while you drive. Just like there’s no law which prohibits you from eating behind the wheel. Having said that, there are rules around negligent driving.

You’re obligated to have full control of your vehicle. If not, you could be charged with dangerous, careless, or distracted driving. The laws vary slightly in each state or territory. However, here you can see a summary of dangerous driving laws and careless driving laws.

Simply put, there are no laws around makeup specifically. But if the act of you putting on your makeup while driving causes you to have an accident or endanger the safety of others, you can be charged.

Interested to know what the safest car colours are? Find out here.

Will comprehensive car insurance cover you if you have an accident while you’re putting your makeup on and driving?

It’s similar to the principle of driving in heels. While there are no specific laws saying you can’t add that eyeliner on the road, it might be a factor that’s carefully considered in an accident or insurance claim.  Especially if it affects your ability to drive or be aware and alert on the road.

If you’re deemed to have been driving dangerously or it’s determined that you weren’t in control of your vehicle because you were putting on makeup, your insurance company could deny your claim.

Instead, put the makeup on at home, drive responsibly, and rest easy knowing your car insurance has got your back.

Doing makeup while driving – over to you

What’s the craziest thing you’ve seen someone doing in traffic? A full-on hairstyling session, sit-down breakfast complete with knife and fork, or something else? Let us know in the comments.