Dachshund: All About the Sausage Dog 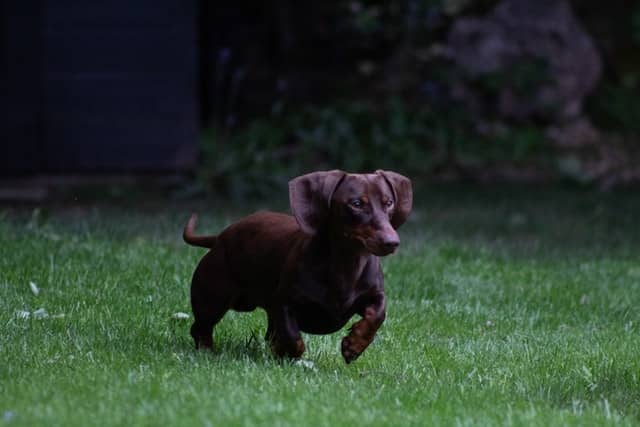 The Dachshund is sometimes called a sausage dog. Especially by kids who might find the breed’s real name a bit hard to pronounce. But though you might think it’s because they look a little bit like sausages with legs, it’s actually sausages which are named after the dog. Not the other way round.

What we now call hotdogs in most English speaking countries was actually first called a Dachshund sausage. But as you can see, it’s not quite as catchy as “hotdog”. So this cute  little breed is actually the inspiration behind one of Australia’s favourite snack foods.

As you probably guessed, Dachshunds originated in Germany. Directly translated, Dachshund means ‘badger dog.” They’re named as such because they were bred to hunt den animals, like badgers. While they might not strike you as the ultimate hunting machine, there is some science behind this. Their short legs were actually pretty useful as hunting dogs, because they’re kept close to ground (and thus the scent) as they tracked. Plus, their small size means they were able to fit into dens made by foxes, badgers, and rabbits.

The Dachshund has notably been described as “a half-a-dog high and a dog-and-a-half long“. And while that just about sums up your “regular” Daxie, they actually come in three sizes; standard, miniature, and kaninchen. The last is often referred to as rabbit (translated from German).

They also come in three coat varieties, which gets you to nine types of Daschund, all things considered.

Here are some more key characteristics of the breed:

More variety than you thought, right? These little dogs pack a punch, both in terms of their endearing good looks and their larger-than-life personalities.

Surely a sausage dog must be harmless and adorable? While they’re super cute, intelligent, and undoubtedly loyal to their humans, Dachshunds are known to be suspicious of strangers (both humans and canine) and are sometimes even aggressive.

That said, they bond strongly with their humans and will love you for life. They require a good amount of love and attention. Without it, they can be prone to separation anxiety. But they’re not always the best choice for a family with kids. Because they’re not trusting by nature, a Dachshund might nip children they’re unfamiliar with – making school sleepovers a bit tricky.

But children growing up with pets experience lots of mental and physical benefits. So if you have kids and have your heart set on a Dachshund, it’s not to say you can’t find the right one for you. After all, each dog is an individual.

Read these articles for a better understanding of the kid-dog dynamic, and be prepared to do some puppy training and socialisation to make sure your Daxie is dog-and-kid-friendly.

Of course, good training is also key to a well-behaved dog.

Like a lot of smart and talented individuals, Dachshunds can sometimes be stubborn and hard to train. In fact, they’re quite similar to Scotties in terms of some of their personaliy traits.

But while you might not win Crufts, you can train almost any dog. You just need to commit and be consistent and patient.

Enlist the help of a professional if you’re wanting to train your Dachshund to do fun tricks or agility. Here are some training tips to help you along the way:

And if you get frustrated or training takes longer than you think, remember that good training is invaluable. Not only does it mean you’re spending time building the bond between you and your dog, but it means they can eventually join you on more and more outings. Plus, having an obedient dog is always a pleasure.

The most notable feature of a Dachshund is their long back in relation to the length of their legs and neck. Because of this, their backs are weak and they’re prone to spinal problems, especially IVDD.

As is often the case with small dogs, they’re also more prone to weight gain and obesity. Make sure to keep a close eye on your dog’s diet and lifestyle to keep their weight in check. Not only does an overweight dog stand more chance of developing IVDD, but it’s also a major contributing factor to diabetes in dogs.

Pet ownership isn’t always a straightforward path, and there can be many unforeseen expenses. You never want to have to choose between your pet and your bank balance. Like all purebred dogs – or really, all dogs in general, your Dachshund could benefit from pet insurance to alleviate financial strain when it’s time to visit the vet.

PrevPreviousCan Animals Get Coronavirus?
NextBengal Cat is One of a Kind, Here’s WhyNext