5 Luxury Cars You Wish You Owned 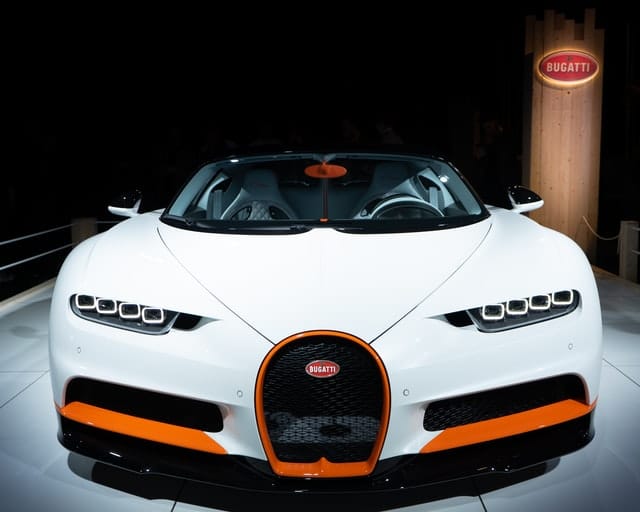 Ever dream about luxury cars, private jets, island holidays and maybe a mansion or three? Us too! And though we’ll probably never own these cars, we can still admire them wistfully. If money were no object, here are five luxury cars we’d have in our garage.

We’re not talking normal luxury cars here. Sure, a BMW would be nice. But seeing as we’re dreaming anyway, we’re going all out. So these ultra luxury cars are where we’d splurge if we had a few spare billions in the bank.

Of course there was always going to be a couple of gorgeous, fast supercars on our list of best luxury cars. And the Bugatti Chiron – successor to one of the world’s most well-known supercars, the Bugatti Veyron – is definitely one you’d want to add to your garage if money were no object.

The Bugatti Chiron Pur Sport is a special edition Chiron which champions aerodynamics, power distribution, and weight reduction. So basically, it’s quick. Really quick. As in, it’ll take you from 0-100km/ph in 2.3 seconds. Bugatti themselves call it “the purest Bugatti Chiron ever”.

And Bugatti has certainly cemented itself as a brand of the ultra-rich. The original Veyron had celebrity owners of all types, from Simon Cowell and Cristiano Ronaldo to Ralph Lauren and Jay-Z. So rest assured, by buying a Bugatti, you’d be in good company.

Here’s a video of it accelerating at speeds which, quite frankly, look terrifyingly fast.

You couldn’t have a luxury car round up without mentioning the Rolls Royce name. There’s just something about owning a Rolls (we imagine, anyway) which makes you feel like you’ve well and truly made it.

But owners also love these cars because they’re pure driving pleasure. Despite being nearly three tonnes, it accelerates like a dream thanks to the V12 engine and steers round tight corners with the lightest of touches.

Though, even if you own one you may not be touching the wheel… if you’re riding in a Rolls Royce Phantom, maybe you’ve a chauffeur anyway? In which case, you’ll still fall in love with the car from the back seat thanks to an extremely quiet cabin (read about how car sound is engineered for luxury here), a ride smoother than butter, and soft-touch leather interior.

Here’s a video of it in action.

The team at Aston Martin are no strangers to exclusive, beautifully engineered cars and the DB11 is no exception. In fact, they’re so committed to quality that the CEO at the time checked the first 1,000 cars himself before they were sold to the public. Imagine pulling up in this to a polo game or tennis match – because, obviously, that’s what you’d be doing with your spare time.

And it’s not just us saying it’s beautiful. It was actually the winner of the Golden Steering Wheel Award from Axel Springer, making it officially the most beautiful car of 2017.

But if you were really going to live out your wildest fantasies, surely it’d have to be the Aston Martin Victor, which will be one of a kind (literally, only one will be made) and supposedly will cost nearly $3 million US dollars.

Just look at it!

A luxury car doesn’t have to mean litres and litres of petrol being used on a quick trip to the shops for milk and bread. Maybe in your wildest dreams, your luxury car is an environmentally-friendly one. In which case, you can’t do better than Tesla. But more specifically, this Tesla.

The Tesla Model S Plaid claims to go from 0-100kph in less than two seconds. On top of that, you can drive 520 miles (over 800kms) on a full charge. Which is double the range of other electric cars. So this is truly a gamechanger when it comes to the world of electric vehicles.

Not only does it put to shame the performance of most electric cars, it does so with most “normal cars” too. So on top of being fast, smart, and attractive, the long range means you could totally use it for roadtrips without worries about running out of power. And, it charges insanely fast too, going from 20% to 80% charged in less than half an hour. Sign us up, Elon.

Again, not all luxury cars are just fast supercars. An ultra-luxurious vehicle doesn’t mean you have to miss out on stuff like caravan travel or the joys of offroading. Nope, you just level up your experience with an incredible SUV like the Lamborghini Urus.

Ever seen Clarkson’s Farm? When Jeremy Clarkson buys a Lamborghini tractor, it’s every bit as excessive and over the top as you’d expect it to be – and the Urus is no different. It’s a blend of sports car and SUV, with no driving pleasure sacrificed.

The Urus boasts over 650 horsepower and the largest brakes ever fitted to a production car. Lamborghini calls it the first ‘Super Sport Utility Vehicle’ in the world. And as you’d expect from the Italians, the Urus is…well…kind of beautiful. It’s extravagant and lavish, and completely unapologetic about that. You can’t help but love it.

Of course, if you’re going to be using this as a towing car, you better make sure you have the flashiest trailer, caravan, or boat in town to match your ride.

If you do happen to drive one of these monsters, we’ll envy you but we won’t insure you. We’re more about providing well-priced comprehensive car insurance for cars you see on the roads every week. Why not check out our discounts and any money you save on your premium can go towards your next Aston Martin?

PrevPreviousBengal Cat is One of a Kind, Here’s Why
NextRetired Greyhounds in Australia: The Perfect Pet?Next