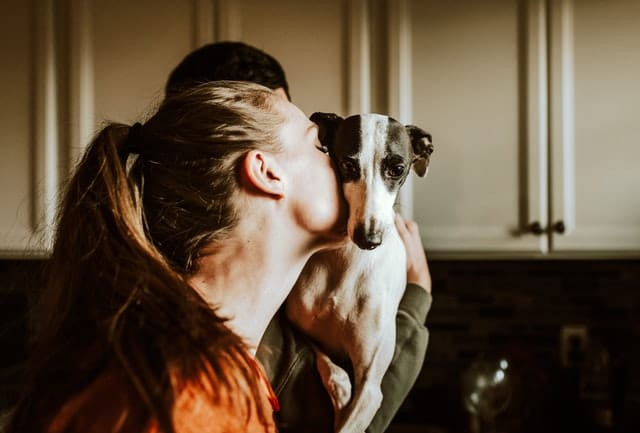 Australia is one of only seven countries worldwide where Greyhound racing still happens. Here, it’s a thriving sport with betting and crowds, similar to horseracing. Naturally, this means there are plenty of retired Greyhounds in Australia needing adoption.

There are also plenty of organisations dedicated specifically to rehoming retired racing Greyhounds.

Like human and equine athletes alike, a Greyhound’s sporting career is normally short lived. They can’t race for years upon years and keep up with the youngsters who are in their physical prime. That’s why most racing Greyhounds retire aged between two and four years old.

If you’ve never considered a Greyhound before (maybe you think you’d need to be marathon fit?) here are a few facts about adopting retired Greyhounds in Australia.

Who knows, maybe you could give one of them a forever home?

Greyhounds make good indoor dogs and are suitable even for apartments. Yep! You might not believe it, but it’s true. If you live in an apartment, check out other suitable pets in our Best Pets For Apartments article.

But back to Greyhounds for now… Not only are they kind and clever, they’re also quiet. They make fantastic companion dogs and have really lovely temperaments in general. And another bonus? They’ll have had some training already, so you probably won’t even need to enter the world of toilet training your puppy.

They also have very short fur, which means no shedding and less clean up. However, as a result of their thin coats and low body fat percentages, they’re sensitive to temperature changes. They feel both heat and cold easily.

So in the colder months be sure to stock up on things like dog winter jackets, jerseys, and cosy beds and blankets. In summer, you’ll need to make sure you provide plenty of shade and enough water.

They’re usually good with other dogs, though typically aren’t great for families who have cats. They’ve spent the first few years of their lives learning how to race after small animals at top speed, after all. This also means responsible Greyhound owners should keep them on-leash when there are small animals around.

How much exercise do retired Greyhounds need?

If there’s one thing people know about Greyhounds, it’s that they’re fast. So naturally, we tend to assume they need tons of exercise. But in actual fact they’re no more high-maintenance than a dog like a Beagle or Labrador.

They can run fast over short distances, but they actually don’t have particularly high exercise needs. Half an hour to an hour of exercise will be plenty for them. And if you have an area where they can run loose and get up some speed, all the better. If you go on a daily walk or run, or can take them to a dog park, beach, or similar, they’ll be more than happy with that.

After their little burst of energy, they’ll happily curl up on the couch for naps and snuggles. They’re practically built for indoor living and chilled out family time.

Starting to think a Greyhound might be a good fit for you? Here are a few key facts about the breed:

A Greyhound can run as fast as 72 km/h – they could keep up with your car! At that speed, you definitely don’t want them taking off after a rabbit or running onto a road in front of traffic. It’s vital you teach them good recall and make sure they learn how to walk on a leash properly.

Also keep in mind Greyhounds have a small head-to-neck ratio. Because of this, they can easily slip out of dog collars and make their escape. If you’re adopting a Greyhound, invest in a martingale collar to keep them safe.

Greyhounds are considered fairly healthy purebred dogs. Because they’ve been bred to be racing dogs, the gene pool has remained quite large. As a result they’re strong fit, and healthy enough for racing, so aren’t likely to have hereditary or genetic health issues.

That said, you should try to work with a vet who’s familiar with Greyhounds. They have some “special needs” and are often sensitive to particular medicines other dogs aren’t. An experienced vet can help you avoid any medication or treatment which might cause reactions.

Another thing to keep in mind is they have a very lean body and no real fat. Which means no padding. So if they lie on bare ground, they can get skin sores from pressure points. Make sure you have plenty of soft, good quality bedding. To treat them like the royalty they are 😉

If you’re thinking of adopting a pet, perhaps it’s time to consider a Greyhound. They’re usually still young when they stop racing, and come with training under their belt.

There are quite a few retired Greyhound adoption organisations to choose from in Australia. Like other rescue organisations, they normally help to make the transition as smooth as possible by matching you with the right pet.

Here are some organisations to look at as a starting point:

Pet insurance for a soft landing

PrevPrevious5 Luxury Cars You Wish You Owned
NextWhat is a Cat Café Anyway?Next