Most Famous Cats in History. Know Them? 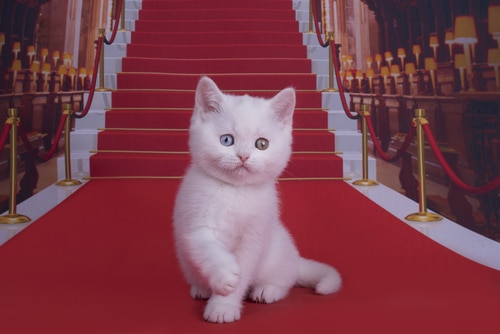 Cats rule the world! OK, maybe just the internet and TV… and to be fair, they share this favourite spot with dogs. For this article, however, we’re focusing on the most famous cats in history (we wrote about famous dogs earlier).

The most famous cats in history hold a small key to our cat loving hearts, of course. It’s hard to pin down who the most renowned are though, because there are so many.

For example, some cats who ran for elections (see, there they go ruling again). And cats who’ve had the most kittens, most money or longest whiskers. For this article, we’ve decided to narrow it down to the following…

Most famous cats in history

Today we’re talking about the most famous cats in history from these genres:

Without further meows, find who these fabulously famous felines are:

The most famous cat in literature is the Cheshire Cat from Alice in Wonderland. Like most cats, he’s self-assured and seems to know what’s going on even when no one else does. His specialty quirks are smiling a big smile and slowly disappearing.

Perhaps Alice should’ve read our ‘microchipping your cat‘ article so if he got lost and picked up by a stranger, they’d know to send him right back?… OK, bit of a stretch but it IS worth a read 😉

Here are a couple of Cheshire Cat fame facts:

We’re guessing this kitty is named after Nala from the Lion King and she has certainly secured her own kingdom. This pretty kitty is a ‘public figure’, ranking as the world’s most popular internet cat with 4.3 million followers.

This is the most followers any cat has ever had – Nala even holds the Guinness World record for this achievement. Nala’s story is a happy one, she’s a rescue cat who found her furever home and stardom at the same time. Read about these cats of Instagram too.

Most famous cat in physics is… Schrödinger’s Cat!

OK, so firstly, we know that Schrödinger’s cat is not an actual cat. But hey, he’s still paying tribute to the idea of cats and that’s got to count for something. So what exactly is Schrödinger’s cat? Put simply, it’s an idea or thought experiment that sprang out of a conversation between physicist Erwin Schrödinger and Albert Einstein.

These two great minds were discussing quantum mechanics, as you do. We won’t get into this now, but to keep it simple Schrödinger’s idea involves a cat in a box who may or may not be alive. The reason we don’t know is we can’t see inside the box.

Garfield is hands down one of the most iconic cats in world history. Happily he’s not a real cat, because his diet of lasagne and coffee isn’t going to do good things for his health. Obesity is actually dangerous for pets because it can cause diabetes in dogs and cats.

Garfield was created by cartoonist Jim Davis. Davis based Garfield’s character on his own grandfather who was apparently “a large, cantankerous man.”

The most famous cats in history are a-meowsing!

And while we’re on the subject of amazing cat feats, here are some articles you might also like:

The most famous cat in your history and now

We’re sure your cat is the most popular one in your life. We also know they don’t need to be known by the world to deserve a soft landing with cat insurance.

Pet insurance means you safeguard your furry family member against the medically known and the unexpected. You can rest assured you doing the best by your cat without having to worry about big spending.